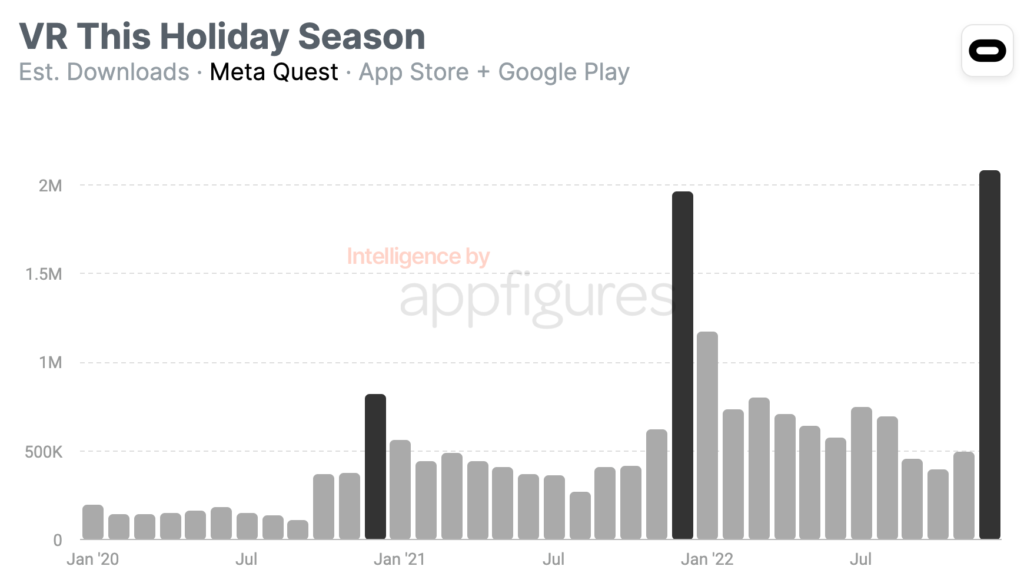 Meta, a leading technology company renowned for its innovative virtual reality (VR) products, has achieved a remarkable milestone with its flagship VR headset, the Quest. According to data from App figures, a market intelligence platform, Meta’s Quest saw a tremendous surge in sales during the holiday season, exceeding even their expectations.

The data reveals that Meta’s Quest recorded a total growth of 2 million downloads at the end of the year, which was driven by a multitude of factors such as an expanding selection of VR content, heightened marketing efforts, and a better user experience.

In addition, the figure for Quest’s downloads in the previous year was 1.97 million. Although the amount hasn’t been increased significantly this year, it still holds great significance for Meta, as the tech giant faced several crises the following year.

Apart from the content offering, Meta also concentrated on improving the user experience with the Quest. The company has released several updates to the headset, including improved resolution, greater comfort, and new features like hand tracking and improved audio. These improvements have made the Quest more accessible and user-friendly, further boosting sales.

Moreover, Meta’s marketing efforts also played an essential role in Quest’s success. The company heavily promoted the Quest during the holiday season, through a combination of online ads, social media campaigns, and in-store promotions. This helped to raise awareness of the product and drive sales.

It is worth noting that Meta’s Quest VR headset is not only a consumer product but also a productive tool for the enterprise, which has been adopted by many companies for training, remote collaboration, and more, thus contributing to the sales.

Meta’s Quest VR headset offers a wide range of features that contribute to its success as a leading VR product. These features include Room-scale Tracking, Hand-tracking, Wireless Connectivity, and more. These features have attracted a wider audience, including both hardcore gamers and casual users looking for new ways to stay engaged and entertained.

As VR technology continues to evolve and become more mainstream, we will likely see more customers turning to products like the Quest for immersive and engaging experiences. Overall, Meta’s Quest VR headset has set a new record for holiday sales, thanks to a combination of factors including a wide range of VR content, improved user experience, and effective marketing efforts.